In 2002, not long after the World Dreams Peace Bridge began, Peace Bridge member Fred Jeremy Seligson, who lives in Seoul, South Korea had the following dream:

I was walking through a barren land without hope. A young man came up and tapped me on the shoulder, saying, “A train has come.” I looked back and saw a long, black locomotive waiting there. So I tot on and rode through the night. The dream train continued to the steps of the U.S. Capitol Building in Washington, D.C. The U.S. President (who was Al Gore) and several senators stood on the steps applauding. Walking toward them, I glanced back and saw around the smoke stack of the train, a large, white paper sign with the words PEACE TRAIN written on it in large, black letters. 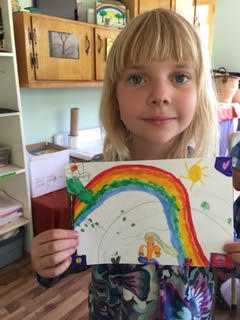 Since the time of this dream, The World Dreams Peace Bridge has created Peace Trains with children all over the world: in Turkey, in South Korea, Germany, Japan, Ethiopia, Israel, Iraq, Jordan, Jamaica, the United States, Canada, Australia, and many other countries. The process is simple. Children are asked to draw on a piece of ordinary paper (sometimes with wheels cut out) a train car filled with what they would send to others in the world to create peace. In many cases the Peace Trains have been shared from one country to the other.

Working on the Peace Train is easy.
Anyone can do it.  And it helps to remind us all that peace can be achieved.For more information and a chance to help create a Children’s Peace Train in your area, join us on Facebook at: