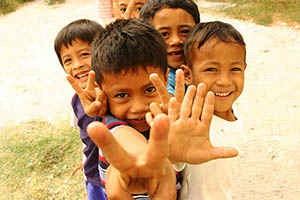 “I love the Peace Bridge, they are so practical” – Kathy Kelly

The Aid for Traumatized Children Project began at the time of Shock and Awe in 2003, when members of The World Dreams Peace Bridge began dreaming of the children of Iraq. Our intent since then has been to provide direct, person-to-person support of the children, who are the innocent victims of war.

Since 2003, the Aid for Traumatized Children Project has raised close to $100,000 for programs dedicated to helping children. Until it closed in 2007, the Peace Bridge supported the work of one of Iraq’s first NGOs, Seasons Art School in Baghdad. We have aided the work of Dr. Ali Rashed and his colleagues in the Middle East in dealing with Post Traumatic Stress Disorder (PTSD) in the children of war. And From the time they fled from Iraq to Turkey in 2008, we have supported and aided one very special family.

In 2005, the Peace Bridge was the recipient of a grant from Carlos Santana’s Milagro Foundation (www.milagrofoundation.org) to aid with the “Dreams and the Children of Baghdad” program we designed with Seasons Art School founder Emad Hadi.

Since 2009, the Aid for Traumatized Children Project has also supported the work of Fusayo Irikora with Iraqi refugees in Amman, Jordan; and has worked with other organizations toward more humane resettlement of Iraqi refugees in the United States.

Learn More About the Aid for Traumatized Children Project >>>