History of the Aid for Traumatized Children Project

May Tung of San Francisco, formerly from ChMay Tungina, was a wise and compassionate woman, a psychotherapist, and a major force behind the Aid for Traumatized Children Project of the World Dreams Peace Bridge.

When bombs began falling on Baghdad in 2003, members of the Peace Bridge despaired at the thought that hundreds of thousands of anti-war protestors from around the globe, the largest anti-war protests ever seen, had not deterred war on a country whose population is more than seventy percent under the age of eighteen. May’s voice was a voice of reason. “We are not a large group,” she counseled, “but we can do something small and personal. We can provide soft toys and art supplies for the traumatized children of Iraq.”

Finding Our Way to Iraq

Finding Our Way to Iraq
For nine months following “Shock and Awe” we read, searched the Internet, contacted people, following one lead after another in an attempt to do what May suggested. All routes to Iraq were closed except through military channels. UN sources in Baghdad disappeared with the bombing of UN headquarters there.

Finally, just before the end of 2003, we discovered peace activist Kathy Kelly, one of the co-founders of Voices in the Wilderness (now Voices for Creative Nonviolence: www.vcnv.org ) Three-times nominated for the Nobel Peace Prize, Kathy and her colleagues had long been fighting against the blockade of Iraq by carrying medical supplies into that country–with the message that no one suffered from these measures more than the children. When the invasion of Iraq by US military forces and their allies began in 2003, Kathy remained in Baghdad as a member of a Christian Peace Keeping Team allowed to stay.

Thus Kathy Kelly inadvertently became the point person for the World Dream Peace Bridge efforts in Baghdad. Through Kathy, early in 2004, we met Emad Hadi and the staff of one of Iraq’s first NGOs, Seasons Art School. This began a relationship which we continued through 2007, when conditions in the city were too dangerous to keep the doors open for this wonderful experimental pre-and after-school program. In the early days of the AFTC program, rather than attempting mail service (available only through the US military) or Western Union (which shut down for over a year in Iraq), the Peace Bridge sent goods: soft toys like teddy bears, musical instruments, art supplies and cash through a network of Kathy Kelly’s contacts, including war reporter Dahr Jamal and the owner of a hotel in Amman, Jordan.

People were so intrigued with this idea of bypassing the warriors to get aid to the children of Iraq, that they lined up to help in heartwarming numbers. A merchant in Amman, when given an order for toys and art supplies, matched the funds we had provided with his own; a group of boys in the Bay Area created intricate Chinese knots for sale to raise $300; students at a compass school in Vermont put on a fundraiser that brought in over $1,000; and Peace Bridge members around the world cajoled funds from friends and relatives. In Norfolk, Virginia, Kathy Kelly became a welcome part of the annual Light in the Dark Festival for Peace, where the group of people involved there raised several thousand dollars over the course of four years in support of the Aid for Traumatized Children Project. Most importantly, in 2006, we received funds from Carlos Santana’s Milagro Foundation (www.milagrofoundation.org) in support of the “Dreams and the Children of Baghdad” workshops we proposed in conjunction with Seasons Art School.

It was through this network of friends that we were introduced in 2004 to Dr. Ali Rashed and his colleagues in Baghdad, who were training medical professionals and educators in work with children with Post Traumatic Stress Disorder (PTSD). Dr. Ali, who became part of the Peace Bridge, continues to work with Peace Bridge efforts and the Aid for Traumatized Children Project.

Nearly 4 million Iraqis have been forced to flee their homes since 2003, as a direct result of the occupation of Iraqi by the US (and allied countries including the UK and Australia). Nearly 2 million have sought refugee in neighboring countries. Estimates of numbers are: Syria (1 million), Jordan (700,000 to 1 million), Egypt (up to 80,000), Lebanon (40,000). Another 2 million Iraqis have tried to find safety by fleeing to more secure areas within Iraq. The flood of refugees is increasing, along with increasing violence and repression in Iraq. The UN estimates that up to 50,000 Iraqis flee their homes every month.

In 2007, Kathy Kelly introduced us to a very special family, one of the many families fleeing the increasing violence of Iraq. Augmenting the incredible difficulty of becoming refugees in Turkey where the family knew no one and did not know the language, was the fact that the mother of this little family of parents plus three children under the age of ten, Ruqayya, was severely ill with Hodgkin’s Lymphoma and needed a bone marrow transplant.

Through the following months, Peace Bridge members and their friends provided not only funds but a constant source of friendship, as Ilkin in Turkey mobilized her network of friends and family, and other Peace Bridge friends arranged to provide aid when our Iraqi adopted family arrived in the United States. In the fall of 2010, Ruqayya died from complications following the bone-marrow transplant she received at the Dana Farber Clinic in Boston. The Peace Bridge, along with its many friends, continues to support our Iraqi family in the many enormous transitions of the past five years.

In 2009, through a set of unforeseen circumstances involving dreams, Peace Bridge founder, Jean Campbell was able to travel to Jordan, where she met with a number of people involved with refugees from Iraq. Together with Omar Shakir, an American graduate student who organized Medical Missions to Syria and Jordan that year, she met with Fusayo Irikura, a remarkable Japanese woman who has, since 2003, fought unceasingly for the rights of the poorest and most-ignored of the Iraqi refugees in Jordan. Since this visit, the Peace Bridge has joined in funding efforts for Fusayo’s work.

The number of children in the world needing aid continues to increase; the dreams of Peace Bridge members continue to remind them of the importance of compassionate action. Through projects like the Aid for Traumatized Children Project, the Peace Train, DaFuMu Dreaming, and Drum Dance and Dream for Peace, members of the Peace Bridge continue to remind themselves and others that a culture based in dreams, and dedicated to the philosophy that peace begins within, can make great strides in creating a peaceful world–sometimes achieving goals that exceed our wildest dreams. 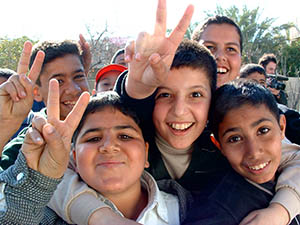